Some of you may remember the review I did last year on The Misadventures of Echo City Capers by Ralph Greco Jr. and Joe Swarctz.  Well, they now have two additional issues, plus a Christmas Special issue and they've been kind enough to provide me with copies for review.  To refresh your memory, these comics are targeted towards kids age 7-12, but adults enjoy them as well.  Instead of violence, these stories are full of slap stick humor that makes you giggle as you read them.  Each issue is written and self published by Ralph and Joe, and they're pretty talented guys.  If you have children who enjoy comics, they'll love the Echo City Capers books.  You can read about the first 4 issues in the review I did last year, and about issues 5 and 6 and the Christmas Special below. 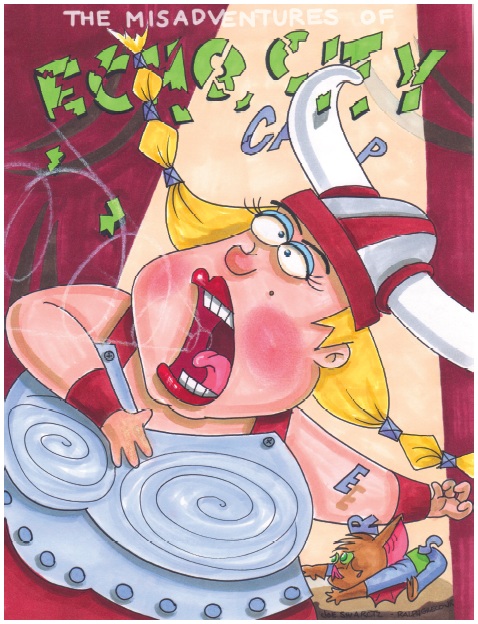 Book 5 "The Grand Confusion":  Guest conductor Zubin BeBoto is in town this weekend performing two sold out shows with the Echo City Philharmonic.  Madame Rosa, Echo City’s never been opera star, wants to kidnap BeBoto so he can conduct her back to imagined stardom at her hideout in Echo City’s closed opera house.  The delusional diva sneaks into the balcony of BeBoto’s show and, with her henchman Figaro-e-oh readying his zipline, she plans to slide down and snatch the great music maker in the middle of his conducting. 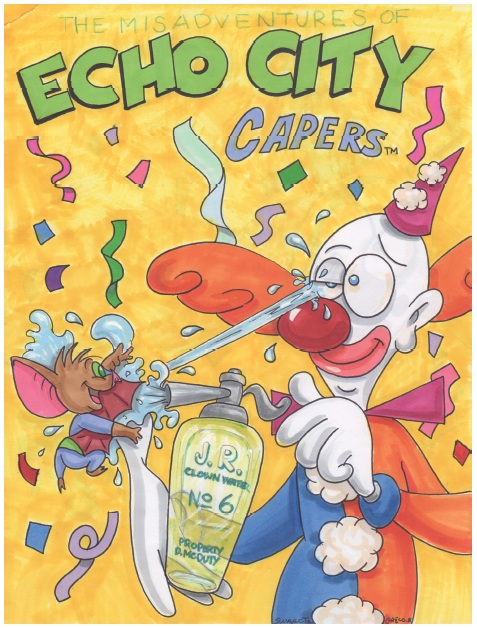 Book 6 "Shine On You Kooky Clown":  Doodle McDuty becomes even more popular than Nightbat.  Echo City’s korny kiddie klown Doodles McDuty wants to be known for more than just his seltzer spritzing, confetti throwing, and balloon animal gags.  But how do you change people’s perception, become so popular all of Echo City will follow you anywhere, and at the same time make every citizen lose faith in Nighbat?  Starting from a failed appearance on one of the city’s telethons, Doodles springs false alarms that Nigthbat jumps to answer, throws his own self celebration parade, and with his Henchmimes builds something secret in a tent on the outskirts of town.  “I know that clown is up to something,” Chief Stone warns Nigthbat, and we all wonder just what kooky new idea Doodles McDuty is cooking up in his krazy noodle of a brain. 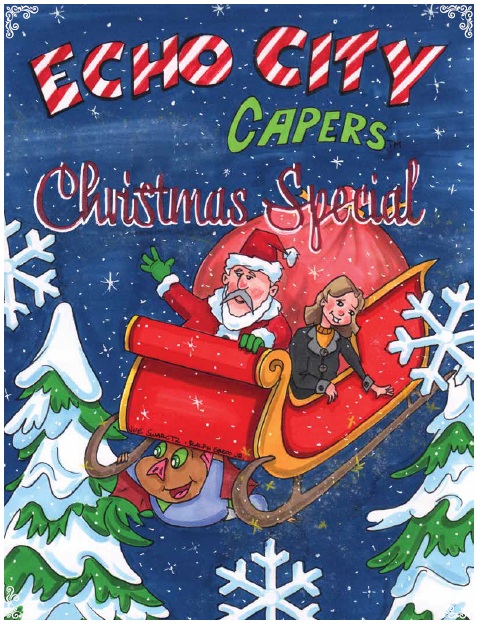 Echo City Capers Christmas Special:  Hi everybody.  Top Echo City Newscaster Baxter Starr here, sitting around my roaring fire, sipping hot cocoa, and once again, snuggling nice and warm in my house enjoying another Christmas Eve.  I love this time of year, eating yummy cookies, enjoying my friends and family
(shhh, they are in the next room, I snuck away for a second to say hit to you), wondering just what Santa might leave me under the tree tomorrow.  Even though I’m a grown-up, award-winning newsman, and have the best hair in town, that warm Christmastime feeling has never left me.  Each year I feel
the same way about the holiday just like I did when I was a kid.

It really is a wonderful time of year, wouldn’t you agree?

There was one Christmas, though, where things got a little crazy in Echo City.  In fact, it almost happened that we lost that warm Christmas feeling altogether, and we didn’t even know it was slipping away.  Would you like to hear the story?  It’s a good one, I promise.

Ok, mmm, let me have another sip here, pull my blanket up a little higher, and open my book to tell you the story of the:  Echo City Capers Christmas Special.

*Descriptions were taken from the books.