A Breath Mint That Will Also Boost Your Energy

I received these products from Viter Energy for review.

Viter Energy Mints are more than just breath mints.  They also contain caffeine.  One mintweighs 900 mg., it's about the size of a standard mint.  But that one mint contains 40 mg of caffeine.  That's roughly half the amount of caffeine that's in a standard 8 ounce cup of brewed coffee or standard sized energy drink.  And with each tin containing 20 mints, you're getting almost 10 cups of coffee's worth of caffeine in each tin of mints!

The mints come in multiple flavors and have a touch of menthol for a strong kick.  They're strong, but they taste great!  They also contain Vitamin B complex (Niacin B3, Vitamin B6, Folic Acid B9, and Vitamin B12).  They're sugar free, have zero calories, and they're Vegan, Star K Kosher, Gluten/Dairy/Soy/Wheat Free. 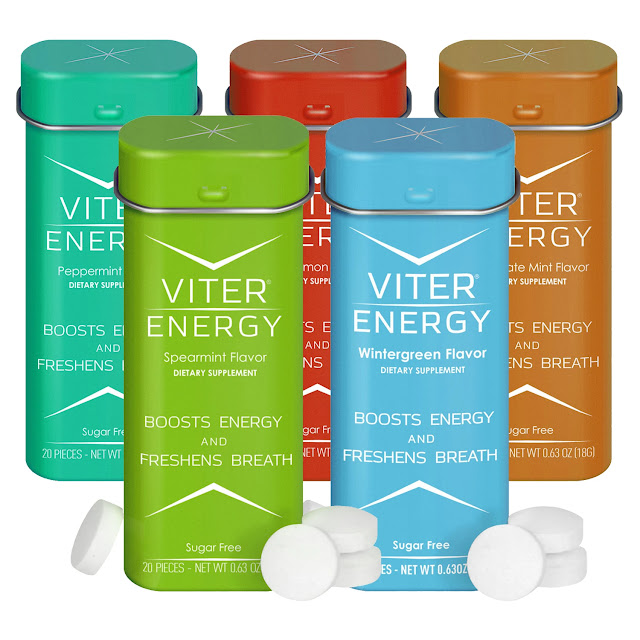 If you can't decide what flavor to try, or simply want to try them all, then the Viter Energy Caffeine Mints 5 Flavor Variety Pack is for you.  This pack contains all 5 flavors (wintergreen, cinnamon, peppermint, chocolate mint, and spearmint).  You can control the amount of caffeine you get through the number of mints you eat.  But you'll actually need to eat fewer mints than you think.  As a mint dissolves in your mouth, the caffeine gets absorbed into your body via your mouth - not through your stomach as it does when you drink coffee or tea.  This absorption is called sublingual, and because of this you'll feel the effects of the caffeine from the mints faster than you would from a beverage.  The amount of time it takes for you to feel the caffeine effects vary depending on your caffeine tolerance.  Most people feel the caffeine from 1-3 mints eaten within an hour. 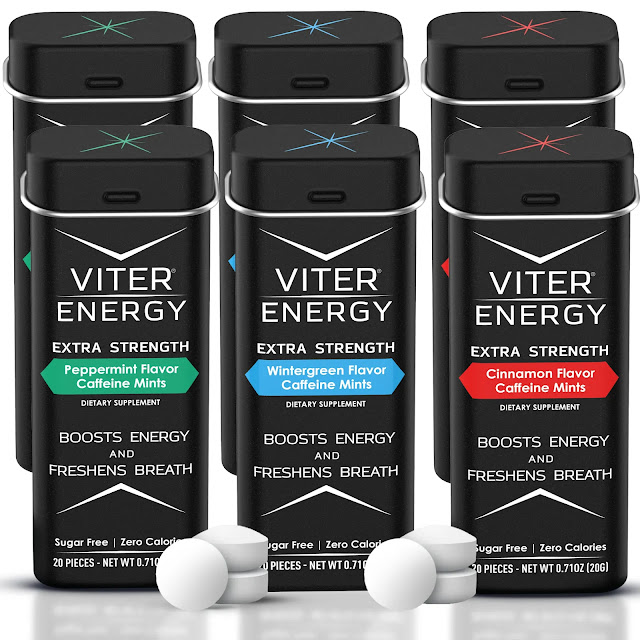 If you want something even stronger, try the Viter Energy Extra Strength Caffeine Mints 3 Flavor Variety Pack.  These extra strength mints are made for people who want energy, great taste, and convenience all in one product.  The three flavors are Peppermint, Wintergreen and Cinnamon.  They have a strong flavor with a fresh kick that'll energize you and freshen your breath.  They have twice as much caffeine as the regular mints.  With 80 mg of caffeine per mint, each mint is like drinking a full cup of coffee or a whole energy drink.
Regardless of which mint you choose, you'll be giving yourself a nice energy boost while you freshen your breath, ensuring that you're ready for anything!
at 4:46 AM