Enjoy some family time with these games!

I received these games from Amigo Games for review.  With so many schools and businesses closed right now, and with the increased desire and necessity to limit social interaction, this is the perfect time to enjoy some family game time!  Not only are these games great for Easter, they are the perfect way to fend off boredom as everyone stays home.  All Amigo Games are available at most major retailers and on Amazon.  You can use the STORE FINDER on the Amigo Games website to find a store near you that carries them.  Today I will be focusing on a series of games called Saboteur. 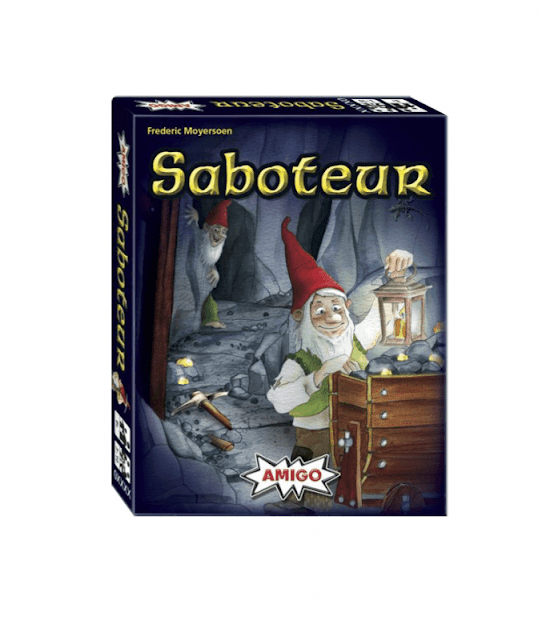 Saboteur has a suggested retail price of $11.99.  This 3-10 player game is recommended for ages 8 and over.  The average game time is 30 minutes.  This is the original Saboteur game and is the classic game of treasure and trickery.  It is one of Board Game Geek's top 100 Family games and is great for both small and large group game play.  There are also tournament kits available so retailers can host in store events leading up to the World Championship. 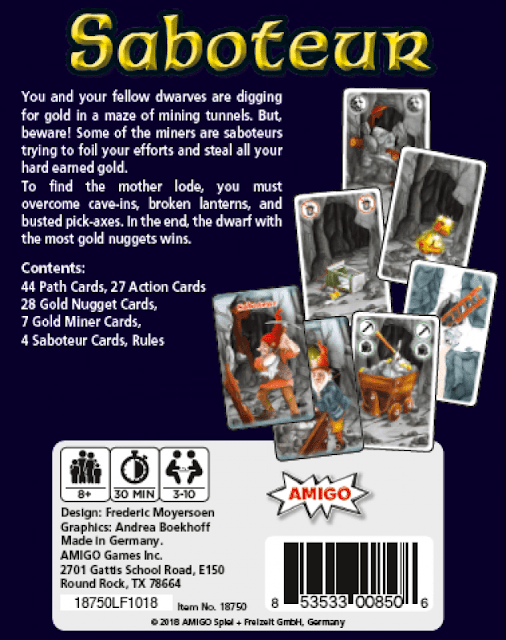 You're digging for gold deep in the shadowy maze of a mining tunnel, when suddenly a pick-axe shatters your lamp and the cavern goes pitch black.  The saboteur has struck again...but who is the saboteur?  Can you and your fellow miners complete a path to the hidden gold?  Or will the saboteur thwart your efforts?  With a unique combination of cooperation and betrayal, Saboteur reveals new secrets every time it's played. 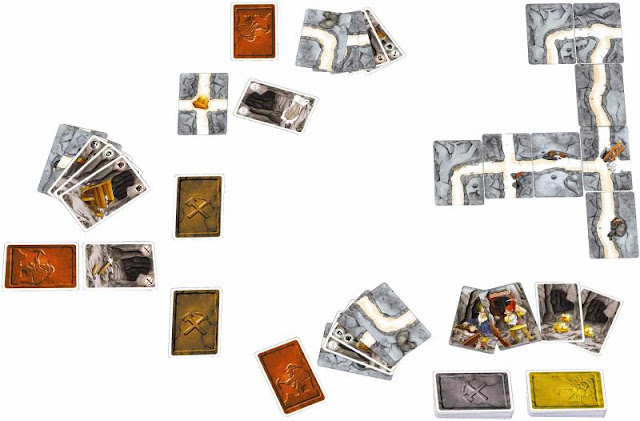 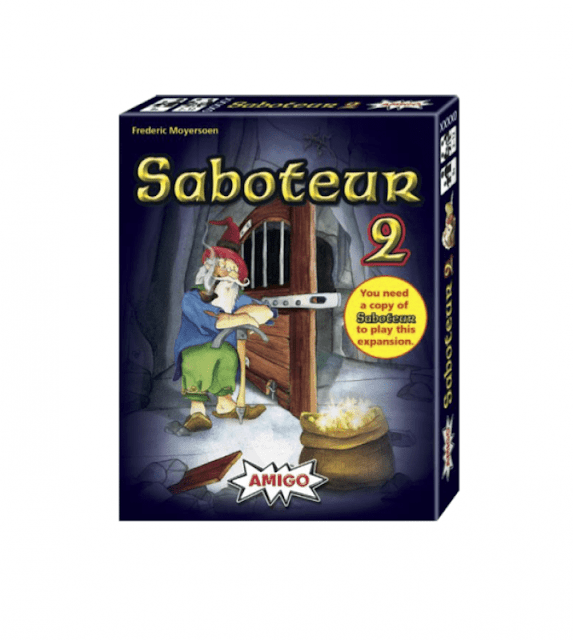 Saboteur 2 has a suggested retail price of $11.99.  It is recommended for ages 8 and over.  2-12 players can play this game and the average game time is 30 minutes.  This is an expansion pack, which means that you need the original Saboteur game as well in order to play it.  But the ratings with this expansion pack are even higher than the original game, so it is well worth purchasing. 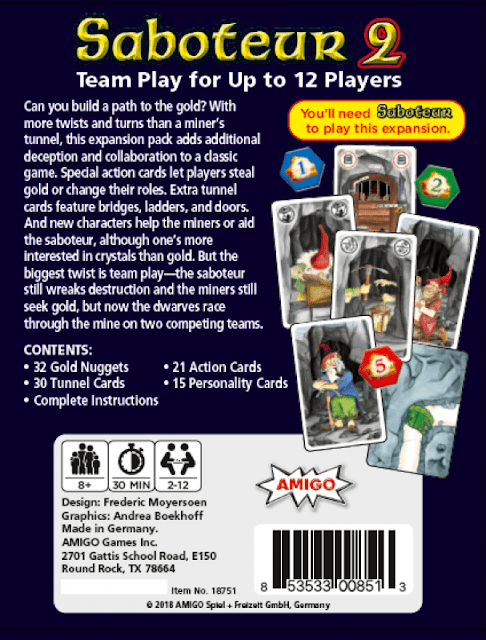 As if Saboteur isn't devious enough, this cunning add on to the classic game offers even more opportunities for deception.  Bridges, doors and ladders help players tunnel deeper into the subterranean mine, and new characters add competing motives - some help the miners, some aid the saboteur and one is more interested in crystals than gold.  But the key new feature is team play, changing the entire game dynamic.

This expansion pack includes the following items to add to the original Saboteur game and change the way you play.  There are 30 Path Cards, 21 Action Cards, 15 Dwarf Cards, 32 Gold Nugget Tokens and Instructions.  Remember, this is in addition to the cards that come with the original game, so it will greatly expand the game play! 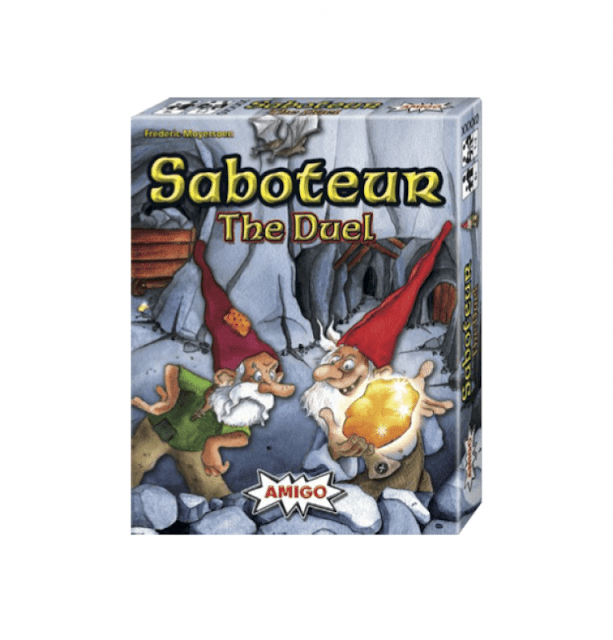 Saboteur:  The Duel has a retail price of $11.99.  It is recommended for ages 8 and over.  This is a 1-2 player game with an average game time of 30 minutes.  This is a complete stand alone game that offers just the right amount of frustration to the fun, fast game play.  The really nice thing about this game is that it includes a solitaire version, so you can play it alone if there's no one else around to play with.  Or you can go head to head against another player as you try to claim the gold before he does! This captivating version of one of the world's top strategy games is specially designed for two players, and also for one single player.  The objective is the same (to stockpile the most gold), but you may want to cooperate and build a tunnel together.  Until it's time to sabotage your opponent and go it alone.  Go head to head, deep under the earth.  Rock slides, broken pick-axes, locked doors - there are plenty of obstacles to play.  But beware of the troll that lurks in the mine shaft and blocks your way!

Saboteur: The Duel is made up of 36 Path Cards, 18 Action Cards, 18 Goal Cards, 2 Dwarf Cards, 2 Dwarf Playing Pieces with Bases, 8 Dwarf Counter Tokens, 2 Keys and Instructions.  Can you stockpile more gold than your opponent while avoiding the lurking troll?  Play Saboteur:  The Duel and find out! 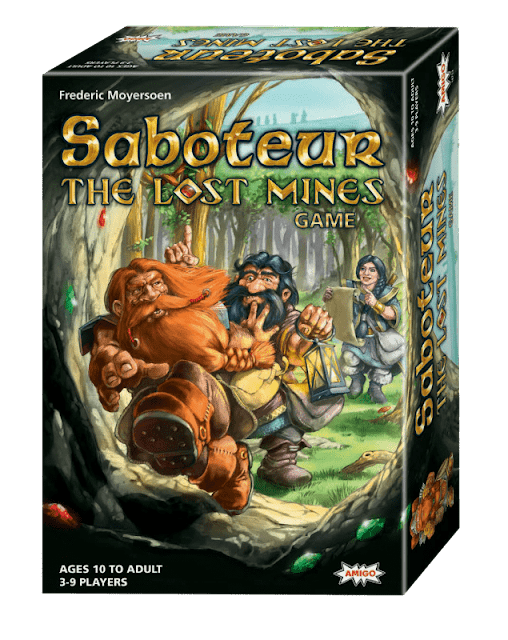 And finally we have Saboteur:  The Lost Mines.  This is the first ever Saboteur board game.  It builds on the classic, well known game play, but adds a new movement system and team play.  There's a new kind of saboteur.  And there's even a dragon!  This game has it all:  competition, cooperation, treasure and treachery!  It's recommended for ages 10 and over.  You need 3-9 players and the average game time is 45 minutes.  The retail price on this one is $19.99. 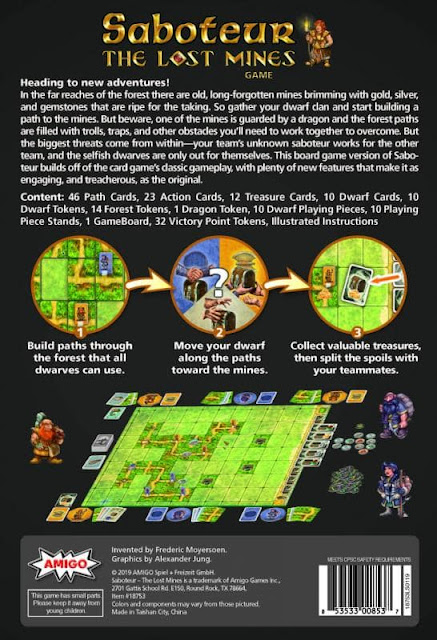 In the far reaches of the forest there are old, long forgotten mines brimming with gold, silver and gemstones that are ripe for the taking.  So gather your dwarf clan and start building a path to the mines.  But beware!  One of the mines is guarded by a dragon.  And the forest paths are filled with trolls, traps and other obstacles.  You'll need to work together to overcome them all.  But the biggest threats come from within.  Your team's unknown saboteur works for the other team.  And the selfish dwarves are only out for themselves.  This board game version of Saboteur builds off of the card game's classic game play, with plenty of new features that make it as engaging and treacherous as the original. 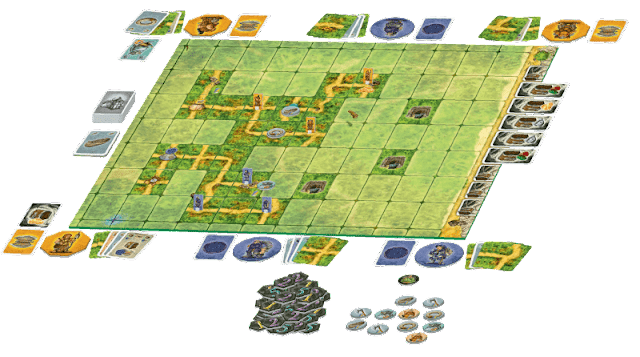